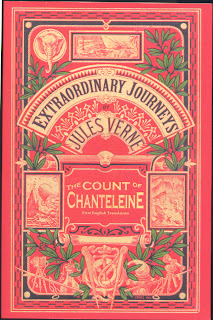 THE COUNT OF CHANTELEINE: A Tale of the French Revolution,
by JULES VERNE
Translated into English by Edward Baxter
BearManor Fiction, Albany, GA, 2011

If few readers in English, other than those who admire the writings of Jules Verne, have heard of his obscure short novel, Le Comte de Chanteleine (1864), that must now change.  For a band of such admirers has devotedly brought out an English translation, The Count of Chanteleine.  BearManor Fiction’s production attracts attention with its colourful cover, holds it with abundance of original illustrations and painstaking annotations, and commands it with a masterful Introduction by Brian Taves.

This work by Jules Verne is not what the reader of Around the World or Twenty Thousand Leagues might expect.  A native of the north-western region of France, Verne did not set his stories there with the exception of Chanteleine.  In his youth he had met at an uncle’s house the children of a Vendéan hero, Pierre-Suzanne Lucas de La Championnière, one of Charette’s lieutenants in the Vendée.  (Consequently he may have read in manuscript La Championnière’s memoir of the war in the Vendée.)  It was this memory which was the seed of Chanteleine.


The eponymous hero, one of a Roland-Oliver pair, and Kernan, the other hero, race to save the Countess and her daughter.  Whoever survives must try to stay alive during the worst of the Terror.  The novel is historical fiction, set during the rebellion triggered by certain measures instituted by the National Convention.  In some respects it conforms to expectations of that genre, but so greatly pared down in the telling as to offer to the novels of - for instance – his admirer, Rafael Sabatini, as much contrast as Goya’s Disasters of War offer to Altdorfer’s Battle of Alexander.  (Acquaintance with the early chapters will justify the reference to Goya.)

There are no complexities in either the plot or the portrayal of character.  And the narrative is as spare and bleak as the scenes depicted.  None of this sounds promising to the prospective reader.  But in an odd way, the powerful sense of ‘rightness’ (ancient Egypt would say Ma’at) overthrown, the presentation, with swift strong strokes of the pen, of two heroes who instantly appeal to one’s desire for justice to be restored, and yet evoke a fear that much must be endured before such an outcome, these effects propel one at the breakneck speed of the narrative until midway through the novel.

Thereafter comes a lull in the action long enough to enable reflection on some improbability in the coincidences which have preceded.  That more coincidences very conveniently follow slackens the story’s hold, and the crowning one not only seems, but in fact is (as a note shows) impossible.  However, the conclusion is as desired and so all’s well.

Verne’s publisher refused to bring out the serial Chanteleine in book form, disapproving what he saw as a misleading emphasis on the horrifying brutalities visited by the revolutionaries on the people of Brittany and the Vendée.  But the whole question of rightness and the French Revolution cannot be resolved into two clear opposites.  Verne does not take any side but that of the hero, - from medieval romance to the pre-WW II historical novel.  In that reckoning it is not a question of aristo versus sans-culotte, as the pairing of the Count of Chanteleine with the peasant Kernan as heroes together makes very clear.  And there are other understated indications of how a truly benevolent relationship between nobleman and common folk, had it prevailed all through France, might have obviated the Revolution and all its attendant horrors.

The Introduction to the novel would have served better as an Afterword, for it gives away the plot entirely, thereby depriving it of a key element, suspense.  Certain choices in translation (“kids” for “les petits”) in a nineteenth century novel about eighteenth century France strike a discord.  Opting for “a few” instead of “some” to translate “quelques mois”, in a reference to the eighteen-month interval between disaster at Savenay (December 1793) and catastrophe at Quiberon (July 1795), reflects unjustly on Verne.

However, it would be a pity if the critical remarks above should put off any likely reader, because The Count of Chanteleine is a worthwhile rarity among the works of Jules Verne, particularly interesting to the fellowship of Rafael Sabatini.  This book is, moreover, praiseworthy for its extras: the excellent maps and notes by Garmt de Vries-Uiterweerd, Volker Dehs’ uniquely informative final word on Verne’s journey across Brittany and that misplaced but invaluable essay by Brian Taves.