REVIEW OF SCARAMOUCHE ON CANADIAN TOUR

The French Revolution was the theme of that great play by which Sir John Martin Harvey will always be remembered – “The Only Way” – and it is evident that this popular English actor has found in those stirring days of France’s history the setting for another success of first rank – “Scaramouche.” 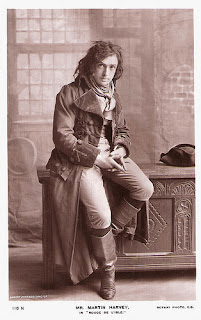 The Martin Harvey Company, minus their talented leader, who is not yet back on the stage following a serious operation in Toronto, opened a three-day run with “Scaramouche” at the Grand theatre on Monday evening.

Sir John was missed, as he naturally would be by Canadian audiences, to whom he has endeared himself, but before the performance was over on Monday evening the audience had given Mr. Gordon McLeod a tribute, the heartiness of which his eminent chief might well have been proud.  It was a smaller audience than the play and its performance deserved, but the first-nighters made up in enthusiasm what they lacked in numbers.

Of Rafael Sabatini’s great tale, now dramatised in both movies and on legitimate stage, little need be said.  Nearly everybody has read the story, seen the movie, seen the play or enjoyed it in all three forms.  It is a great story written by a great story teller; written about those hectic days when France bubbled with drama; dipping for its life blood into the rich stream of incident that packs the pages of the revolution’s history.

On the stage it becomes a typical Harvey vehicle.  It is healthy, blood-stirring melodrama – the kind of a [sic] play that makes a woman weepily happy and draws from a man the comment, “that’s a darn good show!” [Ugh!]

In taking the place of Sir John in the cast, Mr. McLeod starts with a great handicap.  He overcomes that handicap to secure a genuine triumph.  Those who failed to see the play because of the absence of Sir John made a sad mistake.  Playing the daring, impetuous Andre-Louis Moreau, Mr. McLeod gave a performance that brought him back to the stage for many curtain calls between acts and a prolonged demonstration as the final curtain fell.

Miss N. de Silva (Lady Martin Harvey) has perhaps never been seen in Calgary to better advantage than she was on Monday playing the role of Climene, the leading lady in the Binet troupe.  Her scenes with Mr. McLeod, particularly in the third act, were excellent.  Both she and Mr. McLeod were at their best also in the second act, particularly in the scene in the stable, when Scaramouche starts on his tour with the players troupe.

With a melodramatic plot such as that of “Scaramouche,” a play is nothing without a villain, and the fact that the performance is such a success is not a little due to the fine acting of Mr. Eugene Wellesley, who plays the part of Gervaise de la Tour, the arch enemy and last act father of the hero.  He was particularly good in the final dramatic scenes when the denouement takes place and everything is – well, very nearly – nearly to be happy ever after.

Miss Betty Belloc as Aline plays her part charmingly and contributes much to the success of a clever scene between herself and Mr. McLeod in the second act – when she brings forbidden aid to her (then not acknowledged) lover.  The work of Mr. Leonard Daniels as Binet; Mr. John S. Burton in two parts, and Mr Eric Howard as Duroc, all deserve commendation.


[Duroc seems to be the first name that came to Rafael Sabatini’s mind whenever he reached into the properties basket for one.]

In order to make it easier to follow the reviews, here is the programme of the Acts and Scenes:
ACT I. The Garden of the Breton Inn at Gavrillac.
ACT II. A Barn near Guichen.
ACT III. Scene 1. The Green room of the Feydeau Theatre at Nantes (morning)
Scene 2. The same (evening)
Scene 3. The Stage of the Feydeau Theatre
(The action of the Play continues through the change of scene between Scenes 2 and 3)
ACT IV. Madame de Plougastel's Salon in Paris.


I have added here an image of Sir John Martin-Harvey as Rouget de Lisle because the period and costume are similar.  There are none that I can find of him or anyone else from his company in Scaramouche.

Review of Scaramouche, the play

Accident rather than design took me to two successive plays about barnstormers – Scaramouche at the Garrick and When Crummles Played at the Lyric, Hammersmith. The first, true, deals only incidentally with the old tribe. They loom largely: but they are not there so much for their own picturesque sake (though in this respect the author makes good use of them) as to provide an asylum for the hero, a young Monarchist who is induced to espouse the Republican cause for the sake of a private vengeance. The political outline of this play – one might say its ethical outline – is extremely fresh and ingenious. I am no politician; but if I were, I should be tempted to expend the rest of my article on tracing the nice vacillations of public opinion, which have resulted in the balance of this play being poised as we see it. Time was, within fairly recent memory, when the Sans-culotte was the inevitable villain of French Revolution tales. The balance shifting, Aristocrats came in for their share of stage abuse. To-day opinions are so divided that it is no longer safe to put all one’s dramatic eggs in one political basket. So here we have young André-Louis Moreau, a fervent aristocrat, driven against his logical convictions to attack the Marquis d’Azyr on a point of individual tyranny. Moreau proves such a force that he ends as one of the bright particular stars of the new Republican government; after which he sees the error of his ways, and declaring that republicanism will be only the substitution of a new tyranny for the old, resigns his portfolio and goes into voluntary exile. The whole theme is admirably handled, though it is much less stressed than my account of it may imply. I emphasize it here because in our theatre a costume-play with any genuine thought in it is so rare as to be a portent. Most costume-playwrights are content to assert themselves with a few “gadzooks” or “marrys” or “citoyens,” as the period demands, and with a rehash of stock judgements; just as most star managers are apt to insist on plays with no live parts but their own. That is not Mr. Rafael Sabatini’s way – nor Sir John Martin Harvey’s only way, either. The play is both intelligent and well written; and Sir John has surrounded himself with a capable company. Apart from his own performance as Moreau (excellent despite recent illness) there is the Marquis d’Azyr of Mr. Gordon McLeod, the finest rendering of the villain-aristocrat that I have seen since Mr. Malcolm Keen’s de Guiche in Cyrano de Bergerac. Altogether, a sound and worth-while production, which provincial readers will be unwise to miss.

(The rest of the review is about some other play.)